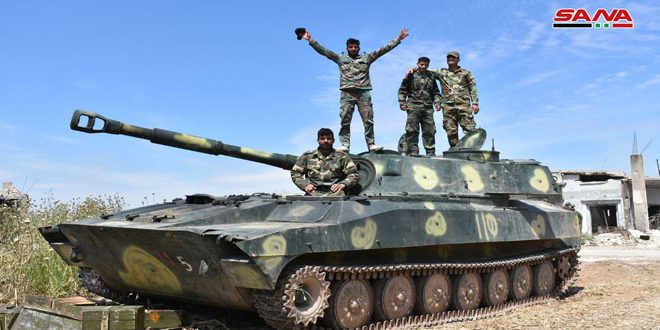 Hama, SANA – With the liberation of Kafar Naboudeh from terrorism, the Syrian Arab Army realized a new achievement towards securing the towns and villages of Hama’s northern countryside which had been targeted by terrorists’ shells.

SANA visited Kafar Naboudeh accompanied by Syrian Arab Army personnel, with SANA’s reporter saying the liberation of the town was achieved following precise and accurate operations targeting the terrorists’ positions in the town, paving the way for expanding the safe and secure area in Hama’s northern countryside to include al-Bana, al-Arima, Tel Othman, Qalaat al-Madiq, and Bab al-Taqa.