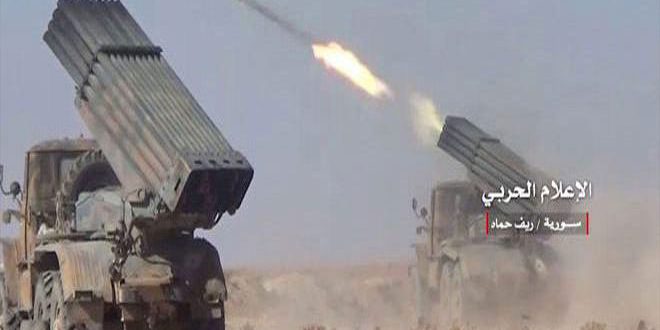 Hama/Idleb, SANA- Syrian Arab Army units on Sunday carried out concentrated strikes on hideouts and bases of Jabhat al-Nusra terrorists in Hama and Idleb province in response for the terrorists’ breaches of the de-escalation zone agreement.

SANA’s reporter in Hama said that army units conducted intensive strikes destroying dens and rocket launchers belonging to Jabhat al-Nusra terrorists in al-Latamina and al-Zakat in retaliation to their rocket attacks on the safe villages in Hama northern countryside.

The reporter said other army units targeted hideouts and positions of terrorists affiliated with al-Nusra in the villages of al-Sahriye, al-Amiqiye, al-Hawash, and al-Qarqour in Hama’s northwestern countryside, killing and injuring a number of terrorists and destroying their hideouts.

In Idleb’s southern countryside, army units targeted with concentrated strikes the supply and movement routes of al-Nusra terrorists in the towns of al-Fatira and Ehsem, inflicting losses upon them and destroying their bases and fortified positions.

On Saturday, army units conducted bombardments on infiltration axes of terrorists and their fortified positions in the depth of the areas where they spread on the sides of the administrative borders of the countryside of Hama and Idleb, destroying dens and equipment of al-Nusra terrorists.