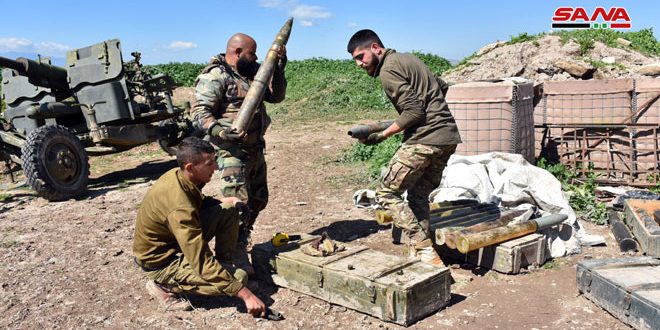 Earlier, terrorist groups fired five rocket shells on residential neighborhoods in Mharda city, and Salhab town in Hama northwestern countryside, causing the injury of a civilian and a huge material damage to some houses and the public and private properties.

In Idleb countryside, the Army units carried out concentrated military operations on the sites and movements of Jabhat al-Nusra terrorists in the villages of Habeet, Tramla and Abdeen in Idelb southern countryside, killing a number of the terrorists.

On Monday, army units targeted positions of the terrorist organizations which tried to infiltrated from the agricultural lands in the directions of al-Latamina and Hasraya towards the safe areas to attack them, killing scores of them and injuring others.