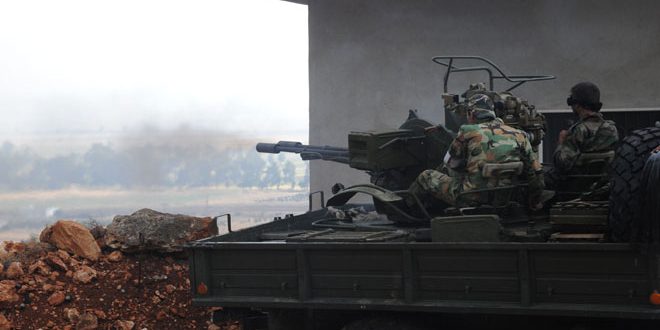 Hama, Idleb, SANA – The Syrian Arab Army on Sunday responded to the repeated breaches of the de-escalation zone agreement by terrorists in the countryside of Hama and Idleb, inflicting heavy losses upon them in personnel and equipment.

SANA reporter said that army units destroyed  vehicles for” Jabhat al-Nusra” terrorists in al-Habbit village in Idleb countryside, inflicting losses upon them in personnel and equipment

The reporter added that dens of “Jabhat al-Nusra” terrorists in al-Sahriya village in vicinity of Shahshabo mountain in northern Hama were also targeted and destroyed by the army units.

Meanwhile, A unit of army foiled an infiltration attempt by terrorist group of Jabhat al-Nusra on the Family House axis on the western outskirts of Aleppo, killing three of the terrorists.

On Saturday,  army units destroyed with artillery and rocket  strikes  rocket and mortar’s launching pads of Jabhat al-Nusra terrorists on the outskirts of Hasraya, Kafar Zita towns in northern Hama, and fortified positions and areas of the spread of Takfiri terrorists in Idleb southern countryside,  destroying  their dens and vehicles  on the outskirts of Abdin village in Khan Shaikhoun township.