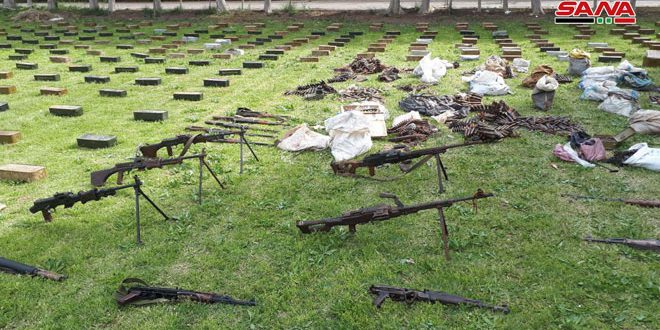 Damascus, SANA – The authorities on Saturday found US-made weapons and ammunition and Israeli-made satellite communication devices that had been left behind by terrorists in the countryside of Homs, Daraa, and Hama.

A source told SANA reporter that during combing operations in areas liberated from terrorism by the Syrian Arab Army, the authorities discovered Israeli-made Motorolla communication system, and around 700 Israeli-made satellite devices left behind by terrorists.

The source added that large amounts of Western-made weapons and ammo were found in the countryside of Damascus, Homs, and Daraa.

Among the weapons and ammo that were found were US-made G3 sniper rifles, various types of shells, rocket launchers, anti-tank missiles, medium and heavy machineguns and their ammo, AGC ammo, and night visions binoculars.

The source added that the authorities seized large amounts of hashish and Captagon pills , which were heading from the southern area towards Homs countryside, in addition to seizing a number of stolen archeological artifacts in the southern area, which were set to be smuggled out of the country.