President al-Assad: Relation which gathers Syria with Iran and Iraq strong, boosted in the fight against terrorism 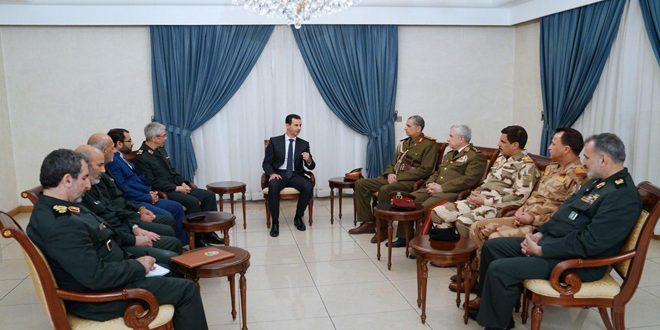 Damascus, SANA-President Bashar al-Assad received on Monday a joint Iraqi-Iranian military delegations that comprised Chief of General Staff of the Iranian Armed Forces Maj. Gen. Mohammad Hossein Bagheri and Chief of Staff of the Iraqi Armed Forces Gen. Othman Al-Ghanimi, in addition to a number of military commanders from the two countries in the presence of Maj.Gen. Ali Abdallh Ayoub, Deputy commander-in-Chief  of the army and armed forces and defense Minister.

Talks during the meeting dealt with the current developments of the field situation in Syria and means of boosting coordination among the three countries to be positively reflected on the operational side of combating terrorism.

President al-Assad affirmed that the relation which gathers Syria with Iran and Iraq is strong that was enhanced during the duration of war as the blood of the Syrian, Iranian and Iraqi armed forces have mixed in the battle against terrorism and its mercenaries who are considered as a mere façade for the countries that support them.

The President added that this meeting is considered as a meeting for principles with which “our people are distinguished and we are proud of, most importantly, the dignity and sense of honor.. this meeting also reflects the same battle, trench and enemy.”

Maj.Gen. Mohammad Bagheri, for his part, stressed that the fight against terrorism and defending Syria is a defense for Iraq and Iran at the sometime, as this terrorism poses threat to all these states and targets the region as a whole, adding that this requires the states and peoples of the region to coordinate their efforts to combat terrorism and confront it.

In turn,  Gen. Al-Ghanimi said that Iraq is the depth of Syria and Syria is the depth of Iraq, adding that borders between the two countries were not and would not stand as an obstruction in front of the unity of the two brotherly peoples who share one history, geography, tradition and destiny.

He affirmed that the Iraqi forces will continue combating terrorism along the Syrian-Iraqi borders and are going ahead in coordination with the Syrian armed forces in dealing with terrorist gatherings in that region.

President al-Assad listened to a brief by Maj.Gen. Mohammad Bagheri, Gen. Al-Ghanimi and Maj.Gen. Ayoub on the outcomes of their meeting, stressing the importance of continuing coordination and cooperation among the three countries in the interests of their common targets.

2019-03-18
m.eyon
Share
Previous Syria calls on US administration to stop financing and supporting terrorism
Next Zarif: Washington hinders all efforts to solve crisis in Syria 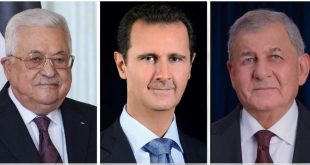