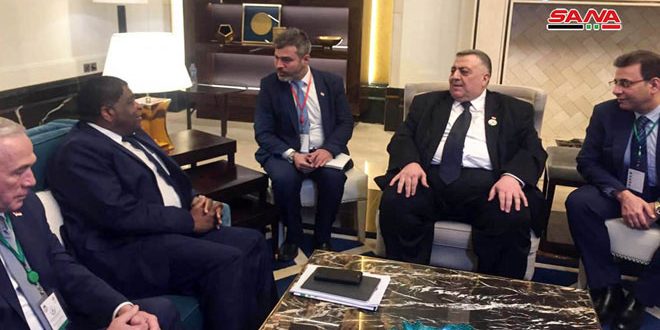 Amman, SANA _ Speaker of the People’s Assembly Hammoudeh Sabbagh and Secretary General of the Inter-Parliamentary Union (IPU) Martin Chungong discussed means of activating and developing parliamentary relations with the Union.

That came during a meeting on Monday on the sidelines of the 29th Conference of the Arab inter-Parliamentary Union (AIPU) currently being held in Amman, Jordan.

Sabbagh underlined the importance of cooperation between the People’s Assembly and the IPU through dialogue, exchanging ideas and enhancing the role of parliamentary diplomacy in building bridges between countries and peoples.

For his part, Chungong voiced his hope to bolster cooperation between the two sides, referring to his recent visit to Damascus in 2015 and showing willingness to repeat it to exchange ideas on parliamentary work and cooperation in this field. 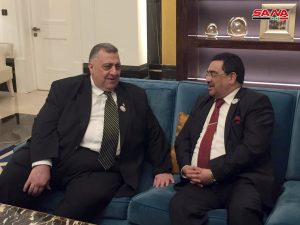 Sabbagh heads Syria’ parliamentary delegation to the 29th Conference of AIPU currently being held in Amman, Jordan under the title ” al-Quds (Jerusalem), the eternal capital of Palestine”.

Abdul-Hamid affirmed that Algeria, as people and leadership, highly appreciates the Syrian people’s struggle and its historic stances with Algeria, which in turn, supports Syria in its fight against terrorism.