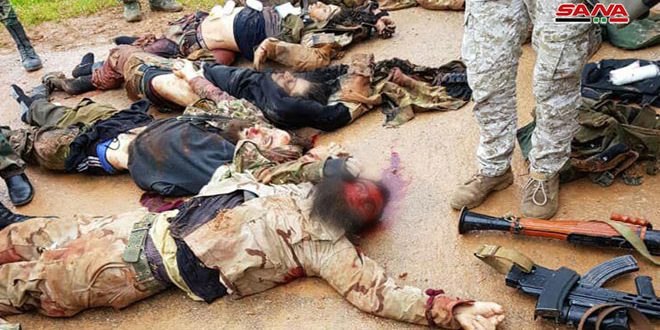 Hama/Lattakia, SANA_ Army units clashed with terrorist groups which attacked in large numbers military points on the directions of al-Masasneh in northern Hama in a new violation of the de-escalation zone agreement in Idleb.

A military source  said that terrorist groups on Sunday attacked military points along the direction of al-Masasneh in northern Hama using various types of weapons after firing the points of al-Madajen, Zor al-Hisa and Khirbet Ma’rin exploiting the bad weather conditions.

The army units operating in the region, the source added, bravely confronted the terrorists, killed a number of them and destroyed their equipment and weapons

The source said that the terrorist attack left some of our army members wounded and a number of martyrs.

The source stressed the army’s readiness and high alert to deal with terrorists’ attacks on the remaining directions of its war against terrorism.

Later, army units targeted with artillery fire and rockets the bases of terrorists in al-Hamra, Bab al-Taqa, al-Madiq castle, and al-Twaina in Hama’s northern countryside, inflicting losses upon them in personnel and equipment.

Meanwhile, a military source said that around 16:30, terrorists attacked army positions in al-Qalaa Mountain in Lattakia countryside using mortar and rocket shells and machineguns, but the attack was repelled by army units.

The source said the battle lasted one hour, and its wake many terrorists were killed while the rest fled, while two soldiers from the army were injured.