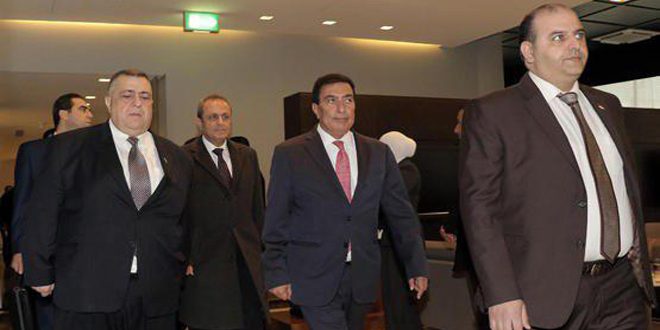 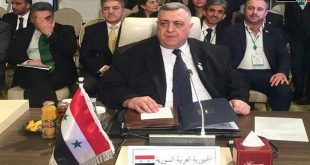 Amman, SANA- A delegation of the people’s Assembly , headed by the Speaker Hammoudeh Sabbagh, arrived in Amman on Saturday, to participate in 29th conference of the Arab Inter-Parliamentary Union (AIPU) entitled “Jerusalem is the eternal capital of Palestine.”

Upon his arrival at Amman, Sabbagh said that there are high hopes for this joint parliamentary Arab action and for this conference and its results and recommendations.

Receiving Sabbagh, the Speaker of Jordan’s House of Representatives Atef al-Tarawneh, affirmed the important role of Syria on the Arab level and the issues of the region.

Al-Tarawneh said that Jordan’s House of Representatives, leadership, and people welcome this visit, adding “Syria always has a place in our hearts, and today this is the right place for Syria among our Arab group.”

Earlier, Sabbagh received an invitation from al-Tarawneh to participate in the activities of the 29th Conference of the Arab Inter-Parliamentary Union scheduled to be held in Amman on March 3-4.

The 29th conference of the AIPU  will be launched in Amman on Sunday with the participation of heads of 16 Arab parliaments and representatives of other parliaments.

In statements upon receiving the delegations, al-Tarawneh called for intensifying collective Arab efforts and arming it with solid will by restoring momentum to the establishments of the Joint Arab action.

He considered the conference as an opportunity to revive the Arab parliamentary work and unite the positions in a way that enables coordination and mobilization for the nation’s central issues, on top of which is the Palestinian cause. 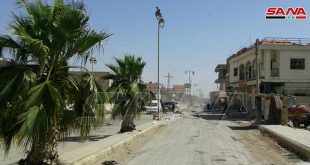 Daraa, SANA- Head of the Council of Nahata town, Mamdouh al-Maf’alani was martyred when terrorists …