Lavrov: Patience is not endless regarding presence of terrorists in Idleb 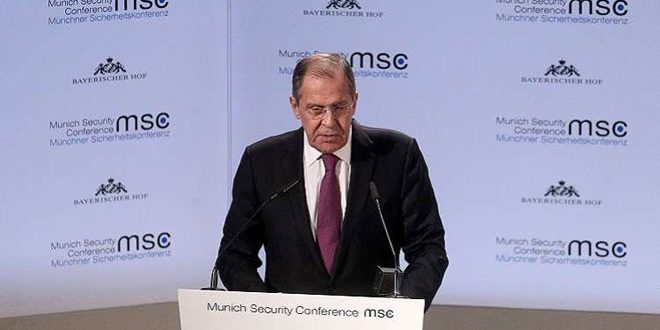 Munich, SANA_ Russian Foreign Minister Sergey Lavrov has affirmed the importance of eradicating the hotbed of terrorism in Idleb, saying that patience in not endless regarding the presence of terrorists in it.

Lavrov, during his speech at Munich Security Conference on Saturday, said that the three guarantor states of Astana process (Russia, Iran and Turkey) agreed during their last summit in Sochi to launch a “Step by Step” process to clear Idleb of terrorist organizations.

He pointed out that a precise plan will be put to save the lives of civilians, not as  the United States did when it destroyed Raqqa city under the pretext of fighting the terrorist organization of Daesh.

He said that the reality of the scenario for false-flag chemical attacks in Syria has become apparent to a larger number of people.

The Diplomat added that the West knew the truth from the beginning  since some of its countries planned these provocative operations to be carried out by ” White Helmets” which is an organization headed by a former agent of Britain’s MI6 secret service.

“Even the Western countries that did not participate in the provocative chemical scenarios were also aware of the absurdity of the accusations against Syria,” Lavrov concluded.