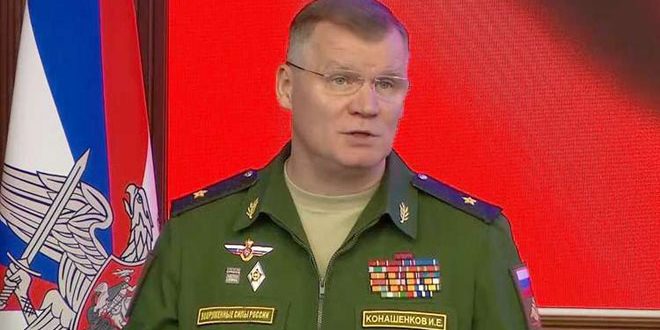 Moscow, SANA – The Russian Ministry of Defense called on US occupation forces and its terrorist mercenaries in al-Tanf area to release the displaced people being held in al-Rokban camp on the Syrian-Jordanian borders.

Ministry spokesman Igor Konashenkov said on Friday that the according to a survey by Red Crescent personnel, displaced Syrians in al-Rokban camp said they are being held in the camp against their will by terrorists supported by the United States.

Konashenkov called on the US occupation forces and the terrorists it supports to end this forced captivity and released the displaced people, at least women and children who suffer the most from cold, diseases, and malnutrition.

He said the Russian Coordination Center and the Syrian government will establish temporary housing centers at Jalab and Jabal al-Ghurab for the displaced people from al-Rokban camp, equipped with warm accommodations, food, necessities, and a medical staff, adding that transport will be provided to return the displaced to safe areas under the control of the Syrian state.

Konashenkov noted that the Syrian Arab Red Crescent, with the aid of the Syrian government, sent an aid convoy to al-Rokban camp, providing food, medicine, clothing, and vaccines.

There are thousands of displaced Syrians being held there against their will by terrorists and US forces, enduring terrible conditions, with reports suggesting that 15 children, most of them infants, have died to the conditions in the camp.