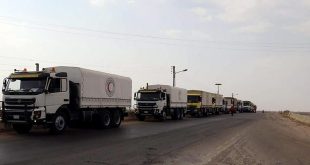 Deir Ezzor, SANA_ A humanitarian relief convoy on Friday entered Hajin region in Deir Ezzor countryside through al-Salhiya corridor, after being blocked for several times by the US forces and US-linked militia of Qasad.

SANA reporter in Deir Ezzor said that a number of trucks carrying relief materials entered Hajin region through al-Salhiya corridor on the Euphrates River in Deir Ezzor eastern countryside for the first time after being blocked by the US forces and US-linked militia of Qasad.

The convoy entered the city in cooperation between the Syrian government, the Syrian Arab Red Crescent(SARC) and the Russian Coordination Center.

At the end of last January and on February 5, the US occupation forces and Qasad militia prevented  a humanitarian relief convoy provided by the Syrian government and the SARC from reaching to locals of Hajin in Deir Ezzor countryside on the eastern bank of Euphrates River.

The Syrian government is working to provide facilities and cooperate with the authorities concerned to deliver aid to those in need and affected by the terrorist war against Syria in various regions.

On February 6, the  SARC delivered a humanitarian convoy of 133 trucks to displaced Syrians in al-Rukban Camp in al-Tanf area alongside the Syrian-Jordanian border where US occupation forces are deployed, hinder the arrival of aid and prevent the displaced from returning to their areas cleared of terrorism.