Ammo and weapons left behind by terrorists found in countryside of Daraa, Damascus and Homs 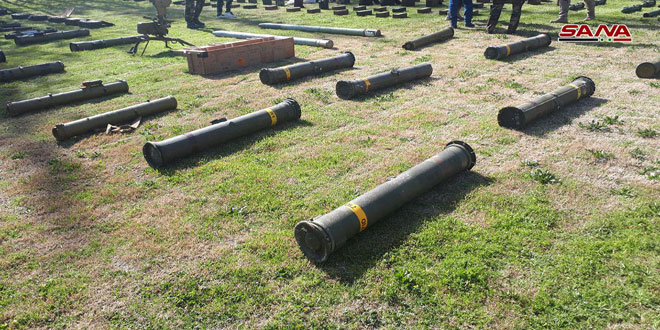 Damascus , SANA- The authorities concerned on Sunday found varied ammunition, medium and light weapons and amounts of missiles, including US-made TOW missiles, and telecommunication devices left behind by terrorists in countryside of Daraa, Damascus and Homs. 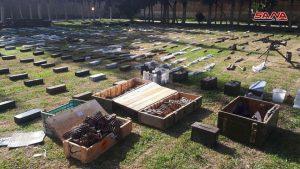 SANA reporter said that the authorities uncovered various ammunition , medium and light weapons and amounts of missiles, including US-made TOW missiles, and telecommunication devices during the combing operations in the areas liberated from terrorism in the countryside of Damascus, Homs, and Daraa .

A source said that the weapons and the ammo were found hidden underground hideouts and storages by the terrorists , including anti tanks missiles of US-made TOW missiles, ,and US-made NATO rifles, in addition to machineguns including Dushka, PKC, PKT machineguns, and 14.5mm and 23mm machineguns, and over 100,000 machine-gun rounds and automatic rifles, and sniper rifles , as well as large amounts of tank shells with their fillings.

The source added that RPGs , mortar shells of 80mm,60mm and 120mm types , telecommunication devices ,thermal goggles and Four-wheel-drive vehicles were found also among the seized weapons.