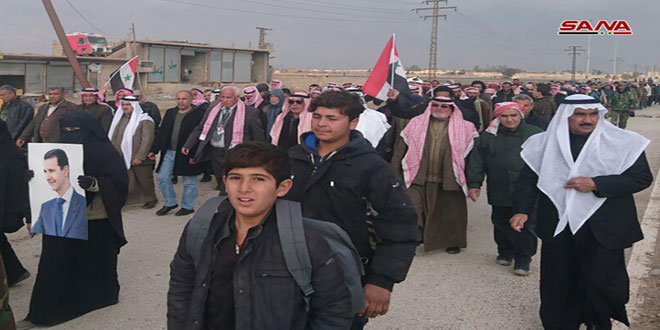 Deir Ezzor, SANA- A new batch of displaced people on Sunday returned via al-Salihiye corridor to their villages and towns in Deir Ezzor which they fled due to the attacks of Daesh (ISIS).

SANA reporter in Deir Ezzor said that a number of the  Syrian Arab Army personnel , in cooperation with authorities concerned received the returnees who returned via al-Salihiye corridor that links between the eastern and western banks of the Euphrates, adding that all the basic needs , and medical services have been provided to them.

For their parts, a number of the returnees thanked the Syrian Arab Army for its sacrifice provided to restore security to their towns and villages, and dismantle mines planted by Daesh terrorists before they retreated from the area, expressing their readiness to contribute to rebuilding what has been destroyed by terrorism.