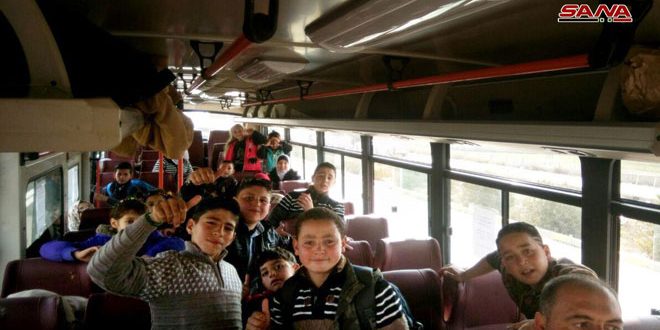 Daraa, SANA – Tens of displaced Syrians in refugee camps in Jordan returned via Jaber-Nassib border crossing within efforts exerted by the government to make those who were displaced due to terrorism come back to the homeland.
SANA reporter from Nassib border crossing said that tens of people including children and women came back home from refugee camps in Jordan through the border crossing, adding that they are to be transported to their hometowns liberated by the Syrian Arab Army from terrorism.
The reporter clarified that authorities sent several buses to transport the returnees to their hometowns after finishing the entry procedures and providing medical services to those in need for them.
Authorities have secured the infrastructure and the basic services to the liberated towns so that the returnees could conduct their normal activities.
Rasha Milhem

2018-12-26
Rasha milhem
Share
Previous Russia: Territories where US forces are present illegally must return under Syrian state’s authority
Next Russia: The Israeli attack on Syria is a blatant violation of its sovereignty and UNSC resolutions