Celebration on 2nd anniversary of Aleppo’s triumph over terrorism 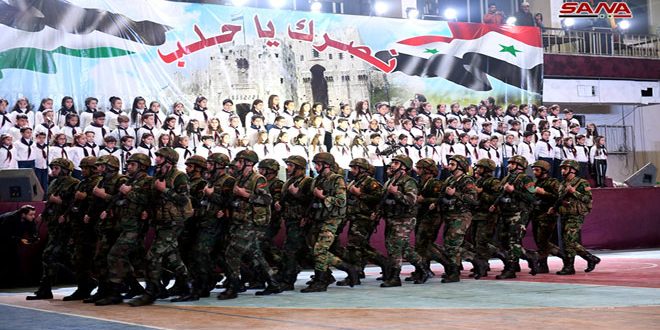 Aleppo, SANA- Aleppo Governorate on Sunday held a public celebration marking the 2nd anniversary of triumphing terrorism and liberating of the eastern neighborhoods of the city from armed terrorist organization.

The celebration was held at al-Assad Stadium, with the participation of official, public, and social figures

The event started with a military parade by members of the Syrian Arab Army and Internal Security Forces, followed by national songs celebrating the victory of Aleppo performed by school students, sports performances, and Armenian and Circassian folk dances.

Activities also included a sports display by individuals with disabilities, a ballet performance, and poetry recital.