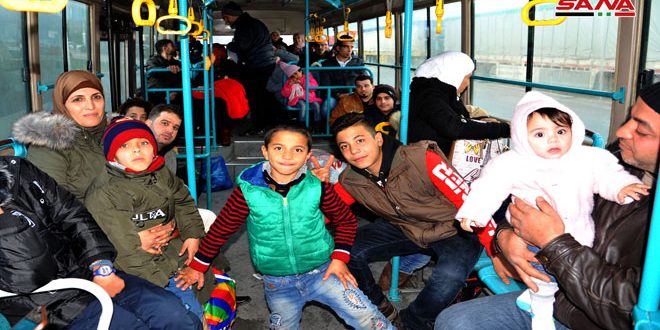 Damascus countryside, SANA- A new batch of displaced Syrians, who fled terrorism, returned home in Moua’damayat al-Cham city in Damascus countryside coming from Lebanon via Jdeidet Yabous crossing as part of the efforts to bring back the displaced to their towns and cities which have been liberated from terrorism.

SANA reporter in Jdeidet Yabous said that a new batch of the displaced Syrians returned to Moua’damayat al-Cham city in Damascus countryside after the authorities have taken the required procedures for receiving the displaced citizens returning from Lebanon to resume their normal life after years of displacement fleeing from the terrorists’ crimes.