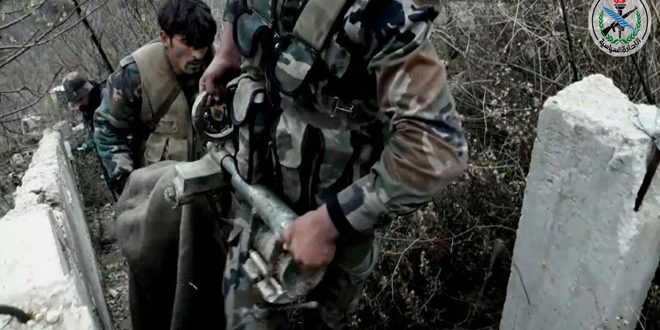 Lattakia, SANA_ A unit of the Syrian Arab Army has foiled an attempt by a terrorist group to sneak into a military post  in the vicinity of Kenssaba town in the eastern countryside of  Lattakia.

A military source told SANA that an army unit operating in Lattakia northeastern  countryside on Tuesday engaged in violent clashes with a terrorist group that tried to infiltrate into a military post in the vicinity of Kenssaba.

The clashes ended up with thwarting the infiltration attempt and killing or injuring many terrorists, while the remaining ones fled away leaving behind weapons and equipment, the source added.

On December 5, an army unit foiled a terrorists group’s infiltration attempt into a military post from the direction of Ein al-Hour, 5 km north of Kenssaba town on Lattakia / Jisr al-Shughour highway.

Terrorist groups belonging to Jabhat al-Nusra and the so-called “Turkistan Party” are positioned in the northern and northeastern countryside of Lattakia bordering the administrative borders of Idleb; they repeatedly attack the Syrian Arab Army points and residential houses in nearby villages and towns.