Participants in the World Peace Council’s meetings: Syria will triumph over terrorism soon 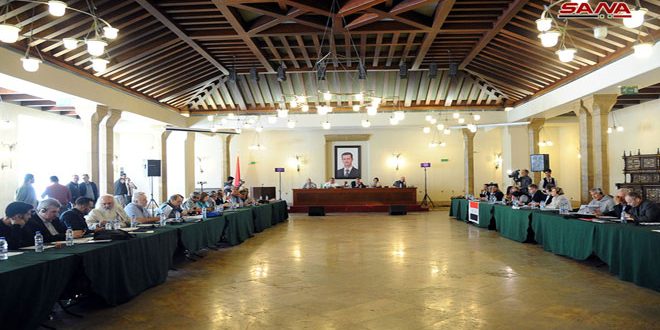 Damascus, SANA The meetings of the Executive Committee of the World Peace Council are continuing for the second day in row at Damascus University with the participation of delegations from 40 Arab and foreign countries.

The participants discussed the organizational and financial reports submitted to the Council and the suggestions aimed at developing and activating its role and activities at all levels, mainly the discussions related to confronting the media outlets’ campaigns which are misleading and distorting facts according to their ends.

Speaking to SANA, Chairperson of the Swedish Peace Council, Agneta Norberg expressed happiness for arriving in Syria to be with its courageous people and their steadfastness which makes the country a role model in the world against imperialism.

ِA number of participants indicated that the war launched against Syria has come to an end thanks to steadfastness of the Syrian people, army and leadership who managed to win this war.

They affirmed that the delegations which are currently visiting Syria will convey what is taking place in the country and will be a witnesses to the victories achieved against terrorism.

Meetings of the executive committee of the World Peace Council started on Saturday. The participants will hold meetings with a number of activities and visit tourist sites in the upcoming two days, in addition to a central festival to be held in Damascus University for solidarity with Syria.