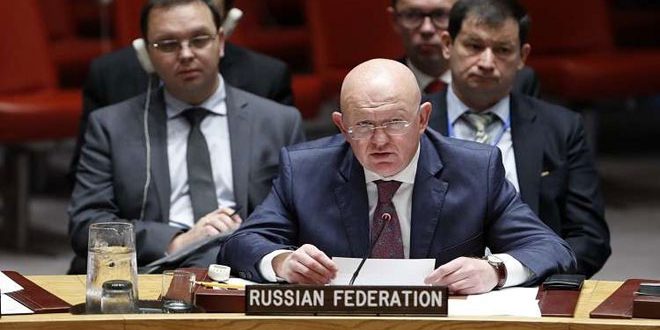 During a Security Council session on the situation in the Middle East, Nebenzya said that it’s impossible to impose the constitutional committees with conditions that contradict the Syrians’ will, and that there are no basis to set arbitrary dates for forming this committee.

He hoped that de Mistura would realize the degree of responsibility he has at this critical time before the end of his mandate, and that he would exert his best efforts to achieve the desired results regarding the political process within his jurisdiction and in a manner that fully respects Syrian sovereignty.

Russia Security Council U Vasily Nebenzya 2018-10-26
Hazem al-Sabbagh
Share
Previous Al-Jaafari: Syria is determined restore Idleb and will not allow it to become new caves for terrorists
Next A woman injured in terrorist attack with rocket shells on Aleppo, Hama