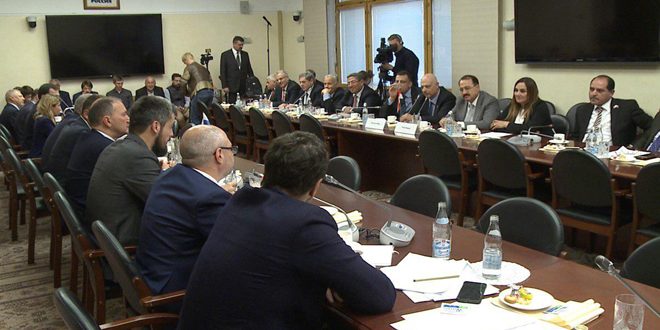 During a meeting with a delegation from the Syrian People’s Assembly in Moscow on Friday, Bogdanov said that Moscow is determined to contribute to the political solution to the crisis in Syria through a comprehensive Syrian dialogue on the basis of UN Security Council Resolution no.2254 and taking into account the results of the Syrian National Dialogue Congress in Sochi.

The two sides dealt with the developments of situation in Syria and means to accelerate the elimination of terrorism.
The delegation also held a meeting with State Duma Committee on issues of public associations and religious organizations.

The delegation also visited the Tomb of the Unknown Soldier and placed flowers on the Kerch memorial in the Crimea to commemorate the victims of the terrorist act that recently killed 20 people in the Republic of Crimea.

uty Chairman of the Russian State Duma Sergey Neverov stressed the importance of parliamentary dialogue between the two countries.

“We must do everything to continue to provide support to the Syrian people in matters of counter-terrorism, reconstruction and economic restructuring,” he said.

On Thursday, the delegation participated in a meeting with the Syrian-Russian Parliamentary Friendship Committee in Moscow.

During the meeting, Vice-Chairman of the Russian-Syrian Parliamentary Friendship Committee Dmitry Sablin said that the Committee plans for joint work in the field of social and economic cooperation through relations between each Syrian province with a Russian region.

He added that coordination is now underway between Tartous and Sevastopol, Homs and Khanty-Mansiysk, as was done between Lattakia and Crimea.

He pointed out that that there are many opportunities for the establishment of a partnership between the other Syrian provinces with the rest of the Russian regions because this type of cooperation leads to the development of the Syrian and Russian regions.

For his part, Syrian Ambassador to Russia Riyad Haddad stressed the importance of strengthening parliamentary cooperation between the two countries.