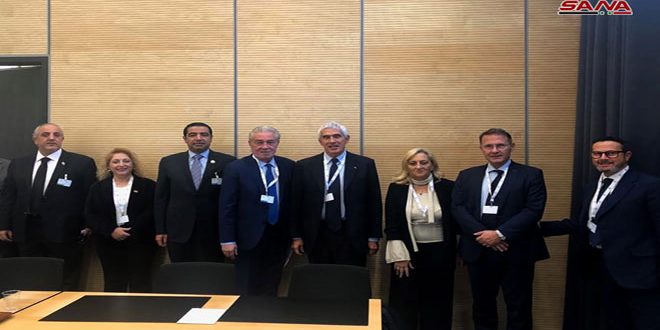 Geneva, SANA-Deputy Speaker of the People’s Assembly, Najdat Anzor, met on Tuesday the Italian parliamentary delegation, led by Senator Fernando Casisni , the Honorary president of the  International Parliamentary Union and member of the foreign affairs committee in the Italian Senate.

During the meeting which was held on the sidelines of the 139 General Assembly of the international parliament union session, Anzor discussed with the Italian MPS the situation in Syria and the victories achieved by the Army over terrorism.

He briefed the Italian delegation on the US and Turkish illegitimate presence on parts of the Syrian territories and their support to the terrorist organizations.

Anzor called for lifting the unilateral coercive sanctions imposed on Syrian People as they affect their life.

Casini, for his part, underlined the importance of using the parliamentary diplomacy to “break the freeze” between Syria and the European Union, calling on the EU to send a delegation to Syria to observe the situation there as it is. He also stressed the necessity to eliminate terrorism in Syria, noting to the efforts of the Syrian government in this regard. 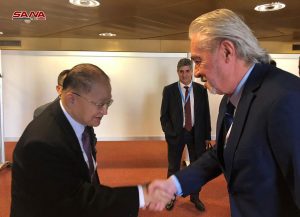 Anzor also reviewed with chairman of the DPRK delegation means of consolidating the bilateral parliamentary cooperation between Syria and DPRK to meet the common interests.

2018-10-16
m.eyon
Share
Previous Egyptian Presidency: We stand by Syria’s side and its army and we support a political solution to crisis
Next Al-Jaafari calls for exerting pressure on Israel to put its facilities under IAEA supervision