Lavrov: We agree with Slovakia on political solution to crisis in Syria 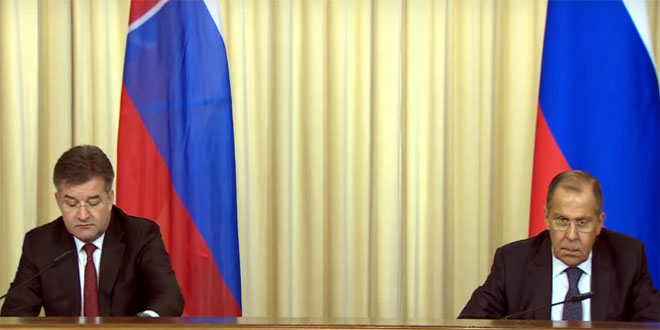 Moscow, SANA- Russian Foreign Minister Sergey Lavrov stressed that his country and Slovakia agree on the political solution to the crisis in Syria.

In a press conference with his Slovak counterpart  Miroslav Lajcak in Moscow on Tuesday, Lavrov indicated that conditions have become suitable for the return of the displaced Syrians to their homeland and that Moscow encourages this return in coordination with the Syrian Government.

He called upon Western states to help in the return of those who are displaced without any double standards.

Lavrov said “We don’t see any reasons that prevent the acceleration of the work on establishing a committee for discussing the Syrian constitution and setting the different dates for starting that work.”

“We continue our work in that domain through Astana track in cooperation with the Iranian and Turkish sides and  there is a continued communication with the parties concerned including the Syrian Government, the (opposition) and the UN representatives,” Lavrov added.

On May 26th , Foreign and Expatriates Ministry handed a list to the Russian and Iranian ambassadors in Damascus including the names of the members of the  Committee to Discuss Current Constitution who are supported by the Syrian Government.