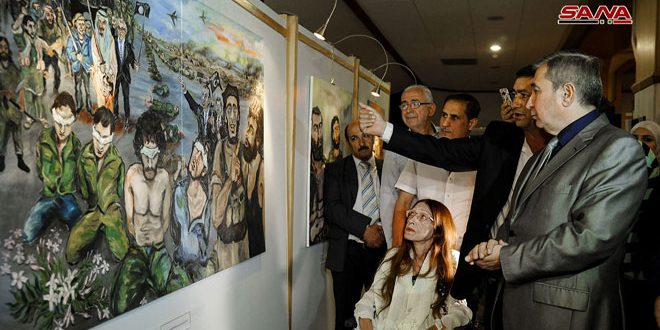 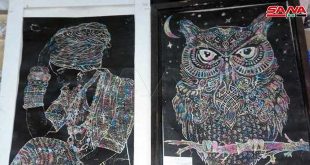 Damascus, SANA – 46 paintings documenting damage caused to several Syrian areas due to terrorism and the heroic sacrifices made by the Syrian army and media martyrs over the past eight years were showcased at “Rising from the ashes” exhibition by German plastic artist Ursula Behr.

The exhibition, held at Dar al-Assad for Culture and Arts, is the result of cooperation between Behr’s friends and the Ministries of Tourism and Culture in Syria with the aim of making her dream of exhibiting her paintings in Syria come true. The paintings’ themes varied between the media war and the West’s conspiracy on Syria, the suffering of people in the country and martyrs of the Syrian Arab Army.

Each painting conveys a clear message to the people in Germany and other western countries and enables them see the reality of what is taking place in Syria through the eyes and the paintbrush of a German citizen.

Among the titles given by artist to her artworks are: “Battle of Palmyra”, “The people’s suffering and war” and “Yara Abbas… Truth is the first casualty of War” which pays tribute to the soul of media martyr Yara Abbas, in addition to “Boustan al-Qasr” painting which depicts life in Aleppo and ” Nubl and al-Zahraa” the Martyrs’ Cemetery in the northern countryside of Aleppo.

In some paintings, Behr attempted to imagine the whole scene of the hostile war on Syria with focus laid on the army martyrs in al-Kindi Hospital and Abu al-Dohour military airbase. Another painting depicted an international meeting held in Paris to support murderers and terrorists in Syria. Hope for peace, the end of war and rising from ashes were also demonstrated in Behr’s paintings.

In a press statement, Behr sent a message to the Syrian people in which she expressed her love to all Syrians and her confidence that they have achieved victory because they are right.

“My current health condition is critical, and if I die here, I want to be buried in Syria, the land of martyrs,” said Behr.

The exhibition lasts till the 11th of October at the exhibitions hall of Dar al-Assad for Culture and Arts.