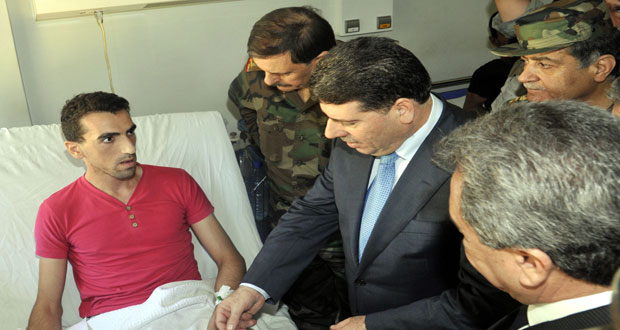 The minister indicated during the meeting that the two sides agreed on an executive program to build mutual scientific and cultural capacities, agreeing that either country teaches the language of the other for their common interests.

Al-Mardini hailed the deep relations binding Syria and the DPRK in all fields, calling for holding high-profile academic meetings between the two countries that set the stage for a bright future in mutual cooperation.

The ambassador, who reiterated his country’s support for the Syrian people and leadership, underlined the importance of pushing back the frontiers of academic cooperation with Syria.

The minister stressed during the meeting the necessity of developing common work mechanisms related to implementing water and irrigation projects, especially that the two countries are facing “common challenges.”

He emphasized the importance of building deeper economic relations with DPRK, hailing its pro-Syria stances against the terrorist war waged against it,

The ambassador, for his part, renewed his country’s support for the Syrian people, expressing trust in their ability to restore security and stability.

He pointed to the need for broadening the scope of cooperation with the Syrian Ministry of Water Resources, voicing readiness to offer all needed help in this regard.