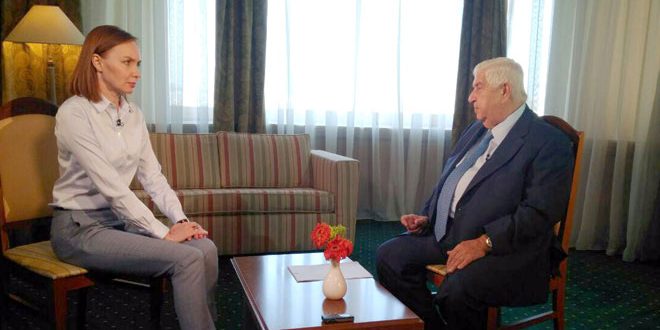 Moscow, SANA-Deputy Prime Minister, Foreign and Expatriates Minister Walid al-Moallem, affirmed that the allegations made by the US and its allies on the use of chemical weapons have become exposed to the world public opinion and its purpose is to justify any potential aggression against Syria.

In an interview with Russia-24 channel, al-Moallem said that the best proof of this is what happened last April in Douma, where Washington deliberately blocked the arrival of the investigation team to the region and rushed to anticipate the launching of the tripartite aggression on Syria which proves that the accusations are just an excuse to justify aggression and that the US is not interested in any investigation that is inconsistent with its policies.

The Minister affirmed that everything promoted by the US will not affect the morale of the Syrian people and the plans of the Syrian Arab Army to liberate Idleb and eliminate the terrorists in Syria.

He stressed that the US presence in Syria is illegal and Washington cannot justify it in any way. Although it has assured Russia that it will withdraw from al-Tanf area, it has not implemented this promise and it is also training groups with different names.

“The US presence claimed 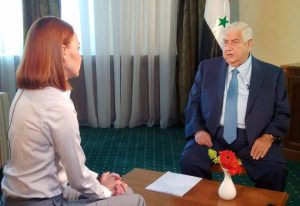 the lives of thousands of Syrian and in every time terrorists were besieged by the Syrian Arab Army, Washington was providing them with protection. As it became clear that Washington’s main objective was to prolong the crisis in Syria in the interests of Israel the minister said.

“As a people and a leadership in Syria, we hope that the crisis will end today, but the Washington-led external intervention hinders achieving that,” he added.

On the return of the displaced due to terrorism, al-Moallem expressed Syria’s keenness on the return of its citizens, stressing that this voluntary return is safe and that the Syrian government is exerting utmost efforts to provide the requirements of a decent life for them.

He added that Damascus and Moscow are making great efforts in this regard, as more than 20,000 citizens have returned from Lebanon recently.

“The West is hindering the displaced return because it wants to use this file to exert pressure on the Syrian government in the final settlement of the crisis and this will not work because they will fail in the policy as they failed on the ground, the minister said.

The Minister expressed his satisfaction with the results of his visit to Moscow, which embodied the joint will of the two friendly countries to intensify coordination, consultation and cooperation relations in all fields aiming at achieving a strategic partnership.

He stressed that the reconstruction process represents a golden opportunity for Russian companies to implement this cooperation between the two countries, especially that the Russian Federation and friendly countries will have priority in reconstruction projects in recognition of their positions in support of Syria against terrorism.