Mikdad: Return of displaced Syrians home must not be linked to suspicious agendas 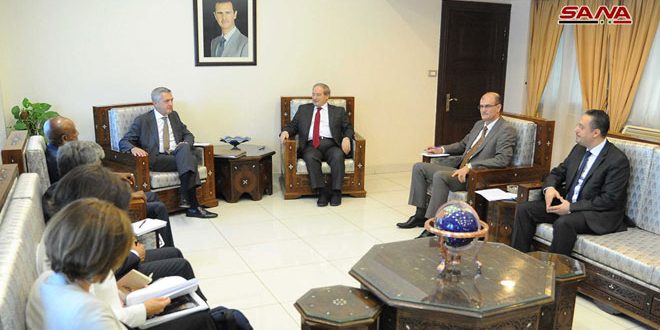 Damascus, SANA- Deputy Foreign and Expatriates Minister Fayssal Mikdad affirmed the importance of not linking the return of displaced Syrians to their homeland with any suspicious agendas that contradict the interests of the Syrians and their return to their cities and villages.

During a meeting with the United Nations High Commissioner for Refugees Filippo Grandi and the accompanying delegation, Mikdad stressed on the importance of continued constructive cooperation between the Syrian government and UNHCR.

He also briefed the delegation on the measures taken by the Syrian state to facilitate the return of the Syrian displaced and Damascus keenness to cooperate with the UNHCR in this regard on the basis of preserving Syria’s sovereignty, independence and unity.

Grandi, in turn, noted the importance and positive statement issued by the Syrian Foreign Ministry on welcoming the return of the displaced and ensuring a voluntary and dignified return to them.

He expressed his satisfaction with the cooperation between the UNHCR and the Syrian state.

2018-08-29
Manar
Share
Previous Hatami: Syria thwarts terrorist scheme against it
Next Hundreds of citizens protest in Qamishli against imposing informal curriculum by Asayish