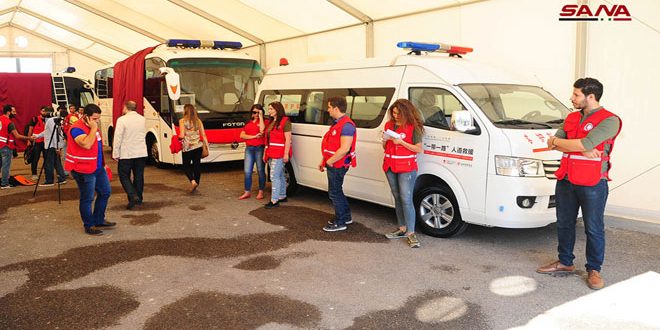 The hospital, which is the first of its kind, includes a gynecology clinic, internal clinic, a laboratory and a radiography room.

Speaking after delivering the aid, Sun Shuopeng, Vice President and Secretary General of the Chinese Red Cross Society, expressed his happiness to cooperate with the SARC, which is supported by the governments of the two countries. 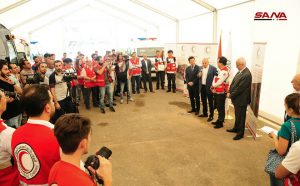 He said that the multi-tasking hospital has traveled a long way until it arrived in Damascus, adding that China hopes that this hospital will reach every place that needs its services in Syria.

He also hoped that the Syrians will overcome the crisis and that the aid will contribute to the consolidation of the values of friendship and peace.

In turn, Political Advisor at the Chinese Embassy in Damascus Ma Shui Liang said that the current developments confirm that the political solution is the right option to resolve the crisis in Syria, reiterating China’s call for respecting the Syrian sovereignty and territorial integrity and its support 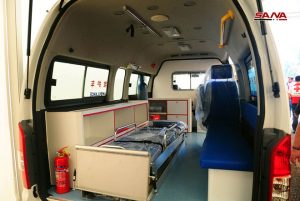 for the achievements of the Syrian Arab Army in the fight against terrorism, which is “an international scourge that must be uprooted.”

The Advisor affirmed that his country will continue to support Syria, which entered the stage of recovery and reconstruction.
For his part, Director of Medical Services Department at SARC, Mohamed al-Jarah said that the organization has a plan to use the hospital in specific responses, emergency situations and to deliver medical services to hard-to-reach areas.

He pointed out that this is the first mobile hospital within the SARC’s system which includes 26 mobile medical clinics providing primary health care services.

ambulances China mobile hospital SARC 2018-08-16
Manar
Share
Previous New archeological findings at Great Church site in Sweida dating back to classical eras
Next President al-Assad and Mrs. Asma visit one of Jobar’s tunnels turned by artists to a place of art and creativity