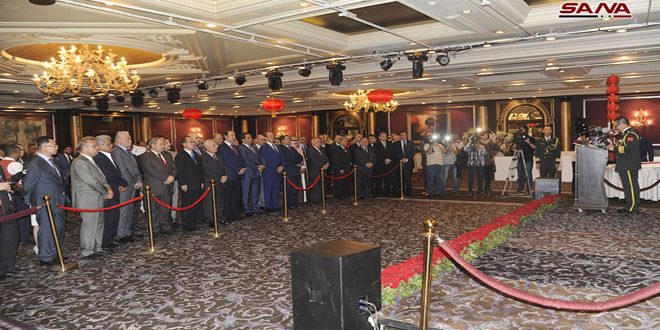 Damascus, SANA- Military attaché at the Chinese Embassy in Damascus Wang Rui Cheng expressed his country’s support to Syria in its war against terrorism and its political support, in addition to providing all the possible humanitarian aid.

During a reception ceremony held by the Chinese Embassy at Damascus-based Dama Rose Hotel on occasion of the 91st anniversary of establishing the Chinese People’s Liberation Army, Wang asserted his country’s keenness on developing cordial relations with Syria, particularly the cooperation between the armies of the countries .

He congratulated the Syrian people on the victories achieved by the Syrian Arab Army against terrorism.
In a statement to journalists Deputy Foreign and Expatriates Minister Fayssal Mikdad underlined the depth of the strategic relations between Syria and China.

Mikdad hailed the role of the Chinese People’s Liberation Army in defending the international security and stability and combating terrorism.