Chinese envoy: Foreign powers have no right to intervene in Syria’s domestic affairs 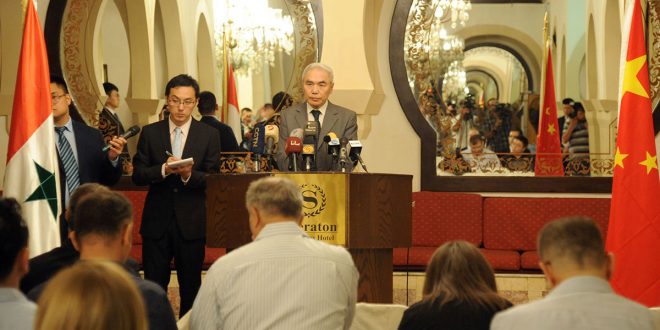 Damascus, SANA-China’s special envoy for Syria Xie Xiaoyan described the talks held on Thursday with Foreign and Expatriates Minister Walid al-Moallem and his deputy Fayssal Mikdad as “very good” which included exchanging view points on the latest developments in Syria.

“We have reached an agreement regarding the proposed issues,” Xiaoyan said at a press conference. 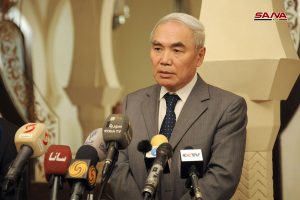 He renewed his country’s commitment to the principle of non-intervention in the Syrian domestic affairs, saying that the Syrian people are the only ones that have the right to discuss, determine any affair and the track of the political process in their country.

“Foreign powers have no right to intervene or impose their projects on the Syrian people,” the Chinese envoy said.

He affirmed that China always calls for the respect of Syria sovereignty, independence and territorial integrity, adding his country rejects any attempt of division.

Xiaoyan expressed his country’s rejection of the unilateral, coercive economic measures imposed on the Syrian people by some countries, among them the US procedures against Syria to achieve political targets.

He hoped the political process in Syria would have progress and refugees would return Home, calling on the international community to offer more humanitarian aid to the Syrian people.