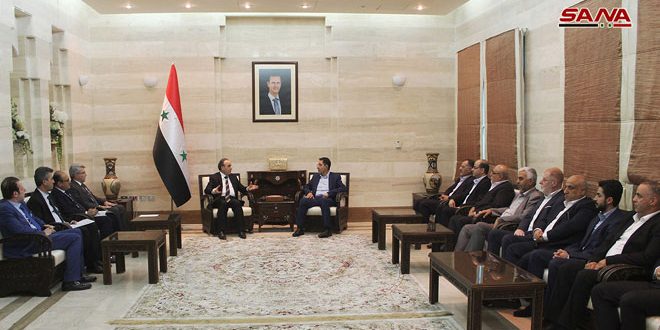 During the meeting, Khamis briefed the Lebanese Minister on the economic improvement Syria witnesses after the stability of energy sector and the development seen in the industrial regions in addition to the return of industrial facilities to work.

He affirmed that partners of victory will be the partners of reconstruction, particularly with the presence of a bulk of facilitations offered by the Syrian government whether in light of legislations or in light of loans.

Minister al-Haj Hassan, for his part, appreciated the victories achieved in Syria on all levels as it has been able to combat terrorism and started the stage of reconstruction.

He considered that the participation of Lebanese businessmen in the Conference of Businessmen and Inventors will lead to positive outcomes, saying that the conference is a strong indication to the recovery of economic sector in Syria.

2018-07-25
m.eyon
Share
Previous UN Resident Coordinator in Syria denounces terrorist attacks in Sweida
Next Army and the popular defend groups eliminate terrorists who infiltrated into the villages and towns of Sweida countryside