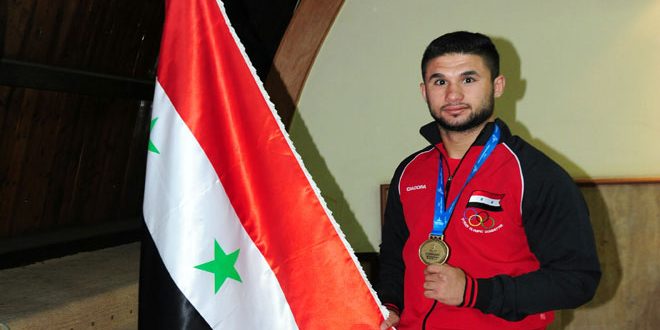 Damascus, SANA – Boxing has been part of Ghossoun’s family for a long time. The five siblings, trained by their father, champion Hussein Ghossoun, have made great achievement in local, national and international competitions.

Boxer Ahmed, who won gold medal at the Mediterranean Games held in Spain, told SANA that they started boxing from a very young age and thanks to his father’s efforts to train and encourage them, they have the confidence to compete against famous boxer names.

Ahmed expressed his ambition to win Tokyo 2020 Olympic Games gold, noting that he will do his best to raise Syria’s flag in this international sports event.

Alaa followed the path of his successful siblings and made remarkable accomplishments as a boxer in the national team. He harvested the bronze medal in the Asian Youth Boxing Championship held 2010 in Iran.

Alaa shined in Kazakhstan obtaining a gold at World Boxing Championships held in Astana, a silver in Atyrau and a bronze in Pavlodar.