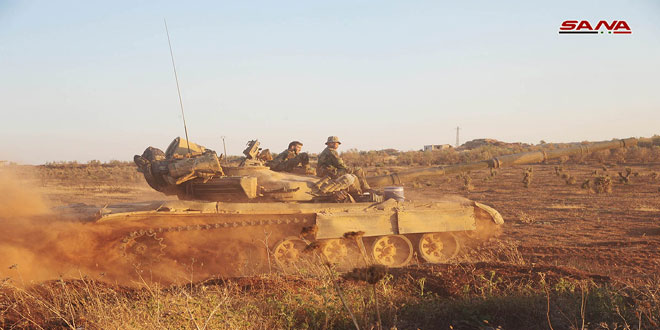 Daraa, SANA- Army units on Tuesday continued the military operations against terrorist organizations in the rest of the villages and towns in Daraa northwestern countryside, expanding their control through liberating the village of al-Mal and al-Mal Hill after eliminating the last gatherings of terrorists in them, a military source said.

SANA reporter said that army units carried out precise bombardments against terrorists’ dens before the break through units advanced in the surroundings of al-Mal village, indicating that the heroism and the experience of the army personnel speeded up the collapsing of terrorists in the area.

The reporter added that establishing control over al-Harra Hill and al-Mal Hill gives the army units a fire control and a safe basis towards the villages and towns where the remnants of terrorists are positioned between the provinces of Daraa and Quneitra.

The reporter said that army units entered Jassem city, about 45 km to the northwest of Daraa city, after reaching settlement in preparation to returning stability and security to it after clearing it from terrorism