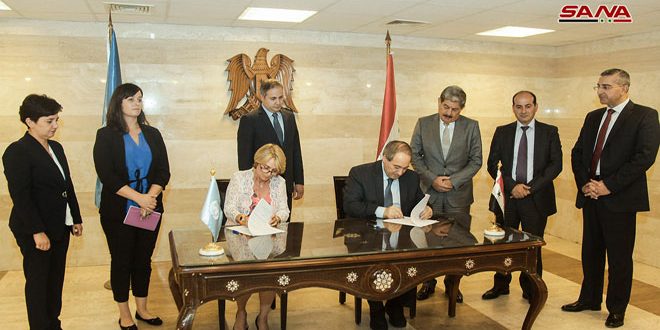 Damascus, SANA-The Syrian Arab Republic and the United Nations Mine Action Service (UNMAS) signed a MoU at the Foreign and Expatriates Ministry HQ in Damascus on Wednesday.

The MoU was signed by the Deputy Foreign and Expatriates Minister Fayssal Mikdad and Director of UNMAS Agnes Marcaillou.

The memorandum gives the UNMAS the right to support the efforts of the Syrian state to clear mines in order to save the lives of Syrian citizens from the serious effects of the mines planted by the armed terrorist groups in the places where they had been positioned during the years of crisis in Syria. 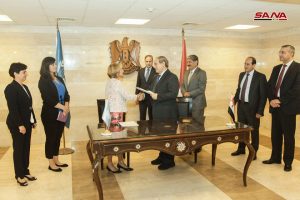 The two sides also held a meeting in which they discussed the implementation of the provisions of the memorandum through cooperation between the Syrian Arab Republic and the United Nations Mine Action Unit.

He added that Syria needs the sincere efforts of the international community, including the UN, to face this great challenge.

For her part, Marcaillou said the signing of this memorandum is an encouraging start for the UN to take the necessary role in drawing the attention of citizens and educating them on the dangers posed by mines to their lives, whether in children’s schools or in cities, villages, agricultural lands, factories and elsewhere.

She pointed out that the UNMAS will make every possible effort to mobilize the financial resources required to accomplish this task in full cooperation with the Syrian government. 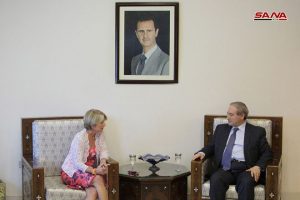 In a press statement following the signing ceremony, Mikdad pointed out that the work according to the MoU will begin in specific areas and then move to all parts of Syria to get rid of the killing machine planted by the terrorist organizations of Daesh (ISIS), Jabhat al-Nusra and others.

Head of UNMAS, in turn, said that UNMAS will work with the Syrian government to identify areas that need assistance and priorities will be set according to needs.

She expressed happiness over the extent of trust and cooperation reached as a UN representative with the Syrian government and her aspirations for a fruitful cooperation in the future.