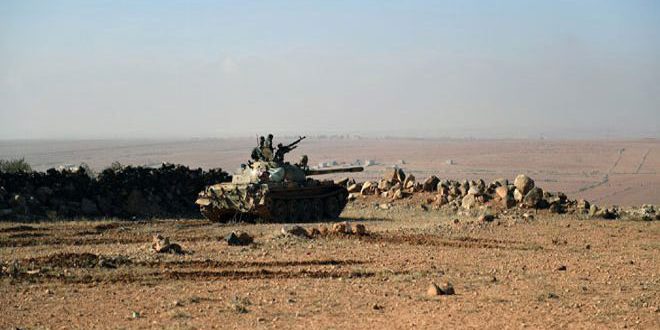 Provinces, SANA-Units of the Syrian Arab Army restored control over Sukar strategic hill in the eastern countryside of Daraa.

SANA’s reporter in Daraa said that during their operations to clear the countryside of Daraa of terrorists, the army units achieved a new progress by restoring control over the strategic hill of Sukar and enhanced their positions over the hill to be used as a future launchpad of military operations against terrorists.

The terrorists’ supply routes were cut off after this new achievement in the area between Um Walad and Jbeibib villages in the eastern countryside of Daraa.

Meanwhile, units of the army continued combing Busre al-Harir and Nahtah towns in Daraa eastern countryside after liberating them from terrorism.

SANA camera entered the two towns and monitored the sabotage and destruction left by terrorists.

SANA reporter said units of the army found different ammunition and weapon caches, some of them of Israeli made.

An army unit foiled a terrorist attack on its posts in the surroundings of Juba village in Quneitra eastern countryside.

SANA reporter in Quneitra said that an army unit, in cooperation with the supporting forces, on Thursday dawn clashed with terrorist groups which infiltrated into the directions of Juba- Um Batina to attack military posts in the surroundings of Juba village in the eastern countryside.

The reporter added that the attack was foiled and scores of terrorists were killed while others fled away in the direction of al-Hamidyia village where terrorist groups affiliated to Jabhat al-Nusra are positioned.

An army unit thwarted an attack by Daesh (ISIS) terrorists towards Point 400 west of Al-Boukmal in the eastern countryside of Deir Ezzor on the Syrian-Iraqi border after destroying their vehicles.

A military source told SANA that an army unit thwarted Daesh terrorists’ infiltration attempt towards Point 400 on the Syrian–Iraqi border, destroying a machinegun-equipped vehicle, and confiscated a drone, weapons and munitions for terrorists, in addition to killing many of them and injuring others.