Al-Jaafari: Syria, before any other country, is concerned about the danger of terrorism 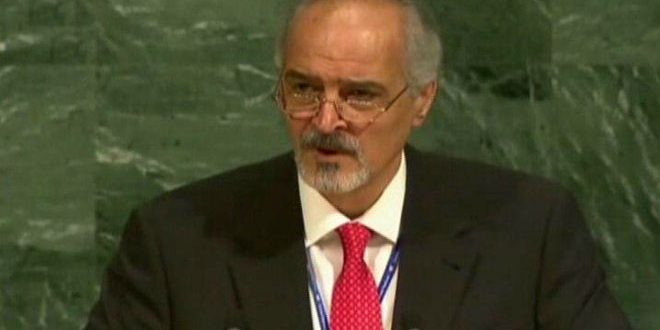 New York, SANA-Syria’s permanent representative to the UN, Dr. Bashar al-Jaafari said that Syria, before any other country , is concerned about the danger of terrorism as the Syrian people have suffered from new forms of beyond-borders terrorism.

“If you have responded to our calls and complaints, during the last 7 years, of the involvement of some governments and intelligence apparatus in the flow of thousands of foreign terrorists from more than 100 countries into Syria and Iraq, we would all eliminate this phenomenon,”al-Jaafari said at a UN General Assembly session about “the UN comprehensive strategy on combating terrorism.

He added that there are governments that have named foreign terrorists in Syria as “moderate opposition” or “Jihadists,” but when they returned to their countries, they re-named them as “terrorists.”

“In conclusion, we don’t believe the crisis is related to legal texts or tools needed to combat terrorism in as much as it is related to the lack of political will at some governments in the field of fighting terrorism,” al-Jaafari said.

He reiterated that Syria believes in the need for developing the traditional pattern in reviewing the comprehensive strategy on combating terrorism each two years as the mounting danger of terror and the emergence of new forms of it require a collective and serious response away from any political motives.

Al-Jaafari: Syria before any other country 2018-06-26
m.eyon
Share
Previous Fresh terrorist shelling attacks in Daraa and Sweida
Next Al-Sabbagh: OPCW suffers from flagrant politicization in a bid to change it into a tool serving hostile and subversive policies