Russian FM: OPCW latest report on Syria adopted under strongest pressure by US 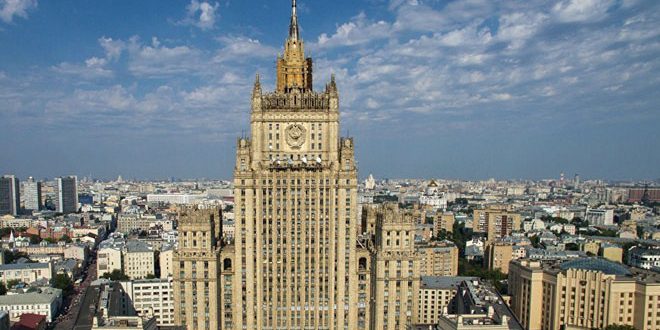 Moscow, SANA- Russian Foreign Ministry stressed that the OPCW report on the “unconditional access to military facilities in Syria” was adopted under the strongest pressure from the United States.

Russia Today website quoted the Russian Foreign Ministry as saying in a statement on Monday“We took notice of the report by Director General of the OPCW and we have repeatedly said that the report’s demands to Syria are beyond the framework of the Chemical Weapons Convention.”

“Attempts to obtain unimpeded and unconditional access for OPCW inspector to any (meaning secret) military and civil infrastructure facilities go far beyond the framework of international law,” the ministry stressed.

The Ministry added “Obviously, such a document was passed under the strongest pressure from the United States and its closest allies. It would be interesting to see what the United States would do should anyone seek to inspect its own facilities this way.”

The statement asserted that “Targeting the Scientific Research Center in Barzeh on April 14th in a joint missile strike by the US, Britain and France is absolutely from outside the Security Council and it is an outrageous violation of the international law,” describing it as a reckless aggression against a sovereign state which is a member of the UN.

“The Syrian government has invited OPCW representatives to visit Barzeh more than once to see the damage done to it by the missile strike,” the ministry said. “It would make it possible to make a report to the Executive Council and take a formal decision to stop inspections,” the Ministry added.

The Foreign Ministry noted “But, as we can see from the OPCW report, no constructive steps have been made. Obviously, the Western countries are seeking to dodge answering to a very sensitive question: what were the grounds to deliver a missile strike on this research center once the OPCW had twice confirmed the absence of any activities prohibited by the Chemical Weapons Convention.”