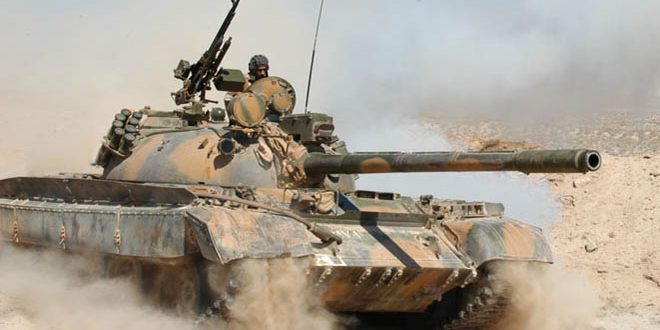 Deir Ezzor, SANA- Units of the Syrian Arab Army, in cooperation with the allied forces, on Thursday restored security and stability to large areas in the eastern countryside of Deir Ezzor, after they were completely cleared of Daesh terrorists.

Over the past few hours, a number of army and allied forces have carried out a swift military operation against Daesh organization, regaining control over several points in al-Mayadeen southwestern Badiya (desert) .

SANA reporter said that the liberated area extends from the road of Haqel al-Wared (field of roses) , al-M’aezleh and al-Tammah, reaching to Ibn Muwain’e with 40 km-long axis.

The reporter added that the army units conducted a thorough sweep of an area estimated at 2000 square kilometers in al-Mayadeen western Badiya through which they dismantled dozens of IEDs and mines planted by Daesh terrorists before they were dismissed from the region.