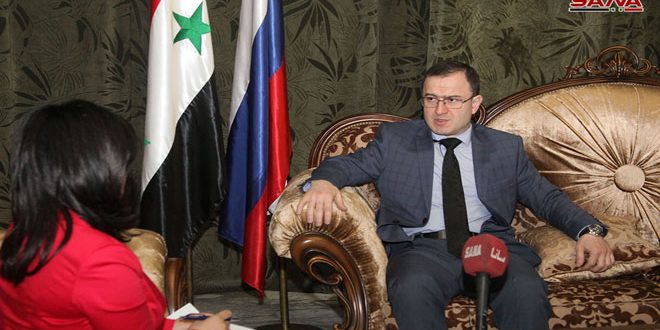 Damascus, SANA- Minister Plenipotentiary at the Russian Embassy in Damascus Elbrus Kutrashev described bilateral relations between Russia and Syria as “very exceptional” at the level of international relations and in all fields.

Speaking to SANA on the occasion of Russia Day, the Russian Federation’s national day, Kutrashev said: “After the victories achieved by the Syrian Arab Army with the support of friends, it is important to aspire to liberate Syrian lands from the occupying forces and to purge it of terrorist groups,’’ which he hoped will be achieved as soon as possible.

He added that the political track is the way to achieve this goal especially that all parties, including Syria’s opponents, recognize that the unity of the Syrian territories and the sovereignty and independence of Syria must be preserved.

Asked about the political process and efforts exerted in this regard, Kutrashev said that the Astana track has proved effective, indicating that the development of events requires maintaining and developing this track by discussing all the vital issues related to the situation in Syria.

He also underestimated the possibility 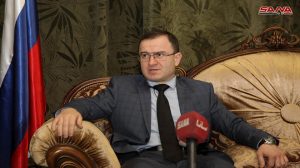 of what he called “the Turkish-American understandings or conspiracies in the north of Syria” in affecting this platform.

The Russian diplomat said that local reconciliations in Syria have yielded tangible results on the ground and improved overall situation in the country.

Speaking about the Russian role during the reconstruction phase, Kutrashev said that Syria has given priority to Russian companies in the field of reconstruction, a process that has not yet started on a large scale, but there are many efforts in this regard taking into account the security situation in addition to the obstacles facing the economy as a result of the unilateral Western measures imposed on Syria and Russia.

He affirmed that the two sides (Russia and Syria) have the will to overcome the obstacles and achieve joint action in the economic field and raise the level of trade exchange to match political and military relations.

Kutrashev added that his country called on the international community on many occasions to fund projects in Syria or at least to refrain from obstructing the efforts by Syria’s friends in this regard, foremost of which is the lifting of the sanctions, but he said all matters in this regard are politicized and the countries that contributed to the destruction “do not want to contribute to the reconstruction.”

“It is bound up with politics. This is a biased, politicized, irrational and immoral position. We condemn it,” he added.