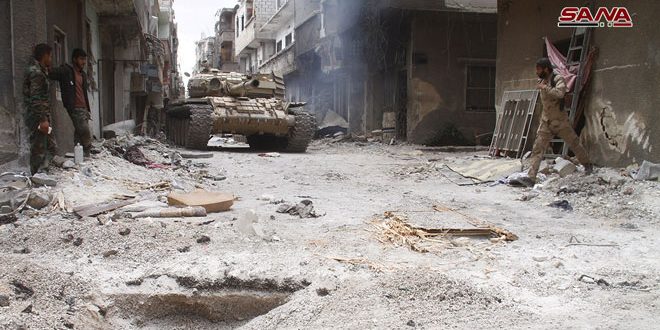 The Army’s engineering units are enhancing their points in the building blocks restored during the past few hours in parallel with the strikes launched by the storming units against terrorists’ movements, according to SANA’s correspondent in the south of the capital.

Due to the strikes, terrorists suffered heavy losses in their ranks.

The correspondent added that Syrian Air Force and the army’s artillery carried out raids against terrorists’ hideouts and destroyed many of their fortifications, trenches and means of supply.

Terrorists in al-Hajar al-Aswad are heavily relying on snipers in a desperate attempt to delay the progress of the Syrian Arab Army’s soldiers who are now experienced in dealing with them, said the correspondent.

Field commanders from the frontlines of al-Hajar al-Aswad said that army units are engaged in direct clashes with terrorists using individual and appropriate weapons.

According to the commanders, the high morale of the soldiers and their experience in this type of fighting contributes to consolidating the Syrian army’s progress and the liberation of the remaining areas under terrorists’ control.