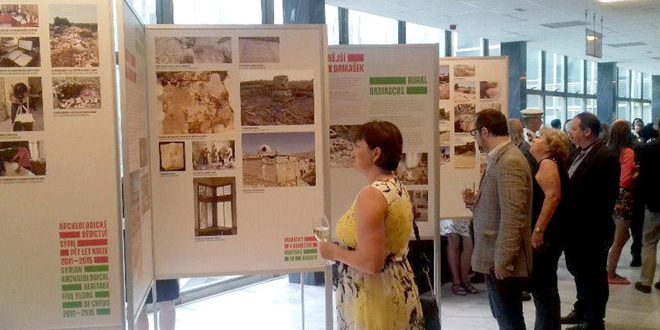 Prague, SANA- A Photo exhibition on the Syrian ruins that were sabotaged by terrorist groups was opened at the Czech National Museum in Prague city on Wednesday.

Head of the Directorate-General for Antiquities and Museums (DGAM) Mahmoud Hammoud told SANA that the exhibition marks the beginning of joint cooperation between the Czech Museum and the Syrian directorate which will allow Czech citizens and European visitors to get acquainted with the ancient Syrian monuments and the vandalism which has been exposed by the Syrian heritage due to the terrorist groups.

In turn, Director General of the National Museum in Prague Michal Lukes hailed the efforts exerted by Syrian archeologists to preserve the Syrian monuments.

According to Lukes, the Czech capital will receive this year twenty pieces of Syrian antiquities vandalized for restoration.

He also expressed his country’s interest in obtaining a license to explore an important Syrian archaeological area and that a joint Czech-Syrian working team will be formed to achieve this objective.

lukes hoped for the return of peace and stability to all Syria.

The exhibition will last for more than a month.

It is part of the cooperation agreement signed, on April 2017, between the DGAM and Czech National Museum which also provides for the contribution of the Czech Republic to preserving the Syrian monuments as an important part of the international human heritage.