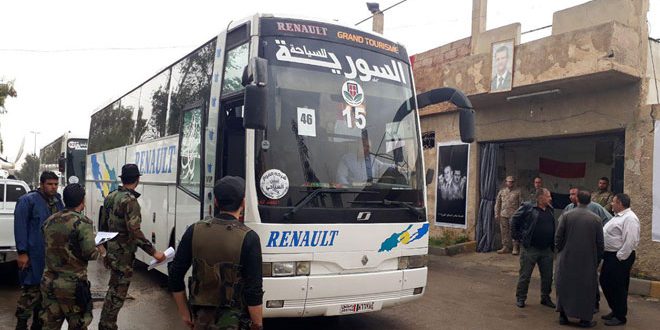 Damascus Countryside, SANA-47 buses which carry hundreds of terrorists and their families from Yalda, Babila and Beit Sahm in southern Damascus have been prepared and evacuated from the three towns to move in one convoy for Idleb and Jarablos.

For the fifth consecutive day, the process of preparing a new batch of buses to transport terrorists who reject the settlement agreement along with their families from the towns of Beit Sahem, Yalda and Babila continued paving the way for ending the presence of terrorist organizations in southern Damascus.

Earlier, SANA’s reporter in southern Damascus said that a number of buses carrying terrorists, unwilling to settle their legal status, along with their families exited from the three towns to be transported later to northern Syria.

The reporter added that more than 60 buses entered Beit Sahem town to transport terrorists who reject the settlement along with their families from the towns to Jarablos in coincidence with the continuation of the military operation carried out by the army on the northern parts of al-Hajar al-Aswad paving the way for declaring the area of southern Damascus free of terrorism.

The reporter added that the buses gather near Beit Sahem roundabout to move later as one convoy to northern Syria.

On Sunday, 62 buses were prepared as the number of buses which have exited through the corridor of Beit Sahem over the past four days reached 171.

The reporter pointed out the process of evacuating terrorists and their families will continue till transporting all terrorists who reject the settlement to start later to settle the cases of those who are willing to stay after handing over their arms, and after that the state institutions will return to the towns and will provide services to citizens after evacuating terrorists from them.

In parallel with the process of evacuating terrorists and their families from the towns of Yalda, Babela and Beit Sahem, Syrian Arab army continued operations against terrorists’ dens in the neighborhood of al-Hajar al-Aswad.

SANA’s reporter said that the breakthrough groups are carrying out a precise operation to clear the residential alleys to the north of al-Yarmouk Camp neighborhood from the south and the southwest after army units liberated the southern part of the neighborhood over the past two days.