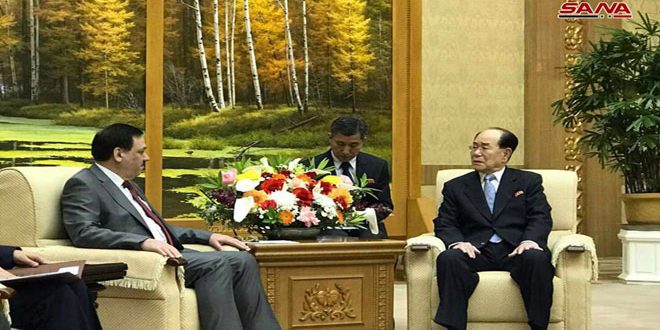 Pyongyang, SANA – Means of developing economic, scientific, technical and trade cooperation between Syria and the Democratic People’s Republic of Korea (DPRK), memos of understanding and future agreements were discussed in the 10th session of Syrian-DPRK Joint Economic Committee held in the DPRK capital, Pyongyang.

DPRK Minister of External Economic Relations, Kim Yong Jae, underlined the importance of further boosting Syrian-DPRK Relations, expressing gratitude to Syria for supporting DPRK, especially in terms of the reunification of the Korean nation and the human rights, not to mention the assistance provided to the Korean people.

For his part, Head of the Syrian side to the committee, Finance Minister Maamoun Hamdan reviewed the wide-scale destruction caused to economic infrastructure in Syria due to terrorism.

He noted that the Syrian government has launched a comprehensive program to restore normal life in the country and provide the people affected by terrorism with their needs to live a decent life.

Hamdan added that Syria highly appreciates the support provided by the friendly countries to help the country rebuild what has been destroyed by the war.

Minister Hamdan also met Chairman of the Presidium of the Supreme People’s Assembly in DPRK, Kim Yong Nam, where the two sides discussed the historic relations binding the two countries and means of further development.

Draft agreements and future memos of understanding to be signed in industry, investment, construction, education, customs and power sectors were also discussed.