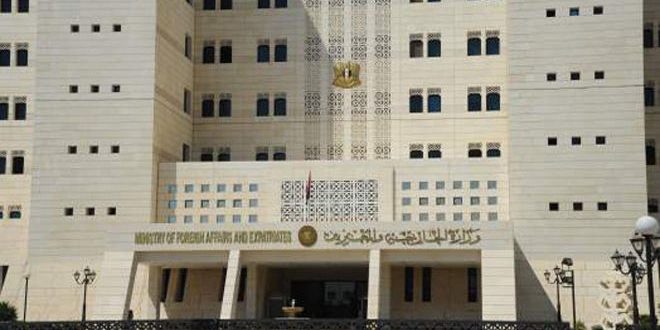 Damascus, SANA- Syria stressed that the continuation of the US-led international coalition’s massacres against the Syrian people is to undermine sovereignty, unity and territorial integrity of Syria and prolong crisis in it.

In a letter to the UN Secretary-General and UNSC President, Foreign and Expatriates Ministry said the warplanes of the US-led international coalition bombarded the residential neighborhoods in al-Fadel village in Hasaka southern countryside on May1st, 2018, claiming the lives of more than 25 civilians, including two elderly men, and injuring more than 100 civilians, as well as causing material damage to the civilians’ houses and properties, and the infrastructure in the villages.

The Ministry went on saying that the continued massacres committed by the US-led international Coalition against the Syrian people and its systematic support for the remnants of Daesh (ISIS) terrorist organization with the aim of re-employing Daesh within the framework of the separatist militias loyal to US in the provinces of Hasaka ,Raqaa and Deir Ezzor proves that the sole aim of this alliance is to undermine sovereignty, unity and territorial integrity of Syria and prolong crisis in it, which contradicts UNSC resolutions.

The letter said that the Ministry is demanding again that the security Council shoulder its responsibilities in preserving international peace and security, act immediately to stop and prevent the recurrence of war crimes and crimes against humanity committed by the Coalition against the Syrian people and end the aggressive illegitimate presence of the US forces and others foreign forces on the Syrian territories.

al-Fadel village in Hasaka Foreign and Expatriates Ministry massacre US-led international Coalition 2018-05-02
shaza
Share
Previous Foreign Ministry: The only objective of US-led coalition is to undermine sovereignty, unity and territorial integrity of Syria and prolong crisis in it
Next Terrorist attack on power line in Dara causes blackout in the city