On the frontlines…Poignant stories of love and devotion 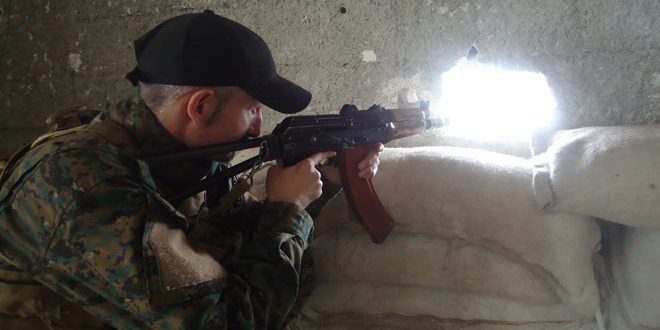 Damascus, SANA- A child’s voice is heard from a cell phone, saying: “I love you daddy” while his father, who is a Syrian soldier is at the frontlines of a raging battle with terrorists in southern Damascus.

The southern part of Damascus is currently witnessing heavy clashes between the heroes of the Syrian Arab Army and terrorist organizations.

In one of the buildings on the edge of al-Mazniyeh neighborhood of which the army has taken full control, a soldier closely lurks, monitoring the movement of terrorists while holding his weapon on his right hand and his cell phone on the left. The soldier’s words interlaced with the sound 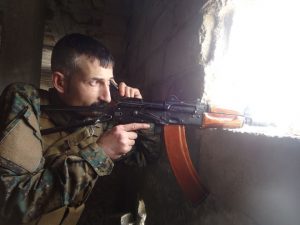 of the clashes next to him. “Where are you my father?” a childish voice comes back again.”

“Bye my love,” says the soldier before he hangs up.

Despite being on the frontline, soldiers keep their cellphones which are the only way to stay in touch with their loved ones.
In some areas where the network coverage is weak or does not exist, the soldier tells his family in advance that he will not be able to communicate with them.

During the battles of Idleb and Hama, I had not spoken with my son for more than a month and a half, one of the soldiers said.

The soldiers eagerly await a leave from the battlefield to go see their families, taking with them sweets and toys for their children to make up for their long absence. 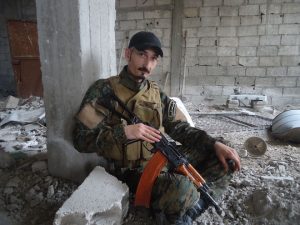 “I am not afraid of death,” Rawad, a soldier, said.

According to Rawad, terrorism has forced Syrians to fight. “If I die, my children will be proud of me.”