Army intensifies operations against terrorists’ position to the south of Damascus 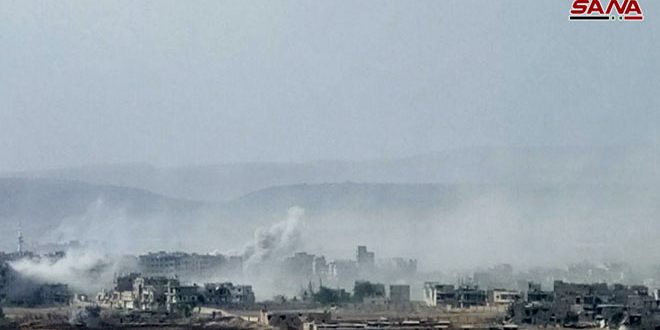 Damascus, SANA- Syrian Arab Army units on Wednesday intensified strikes against positions and main supply routes of the terrorist organizations which are positioned in al-Hajar al-Aswad in the framework of the continued military operation to secure the area to the south of Damascus and to eradicate terrorism in it.

SANA’s reporter said that since midnight, army units carried out intensive strikes against terrorists’ positions in al-Hajar al-Aswad, destroying many of their vehicles and positions along with the ammunition and equipment inside them.

The reporter added that the army’s ground forces continued to advance from different directions after breaking the defenses of the terrorist organizations, and they were able to cut off many of the terrorists’ supply and movement routes after fierce clashes in which many terrorists were killed or injured.

The reporter indicated that the Syrian Air Force intensified its airstrikes against the main positions of the terrorist organizations in the area, as many weapons and ammunition caches belonging to the terrorists were destroyed.

He also said that the military operations of the army units will continue until control is established over the south of Damascus, and consequently securing the neighboring neighborhoods which the terrorist organization target with shells.