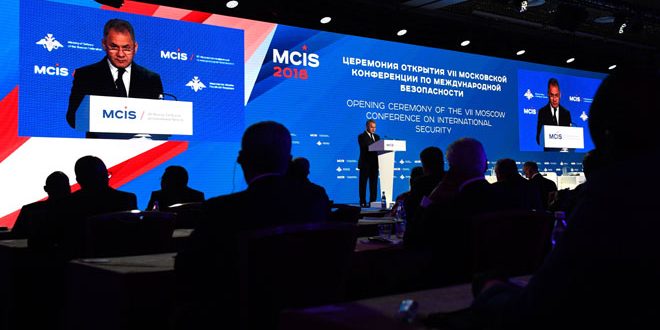 Moscow, SANA – Russian President Vladimir Putin said that despite its military defeat, Daesh (ISIS) retains its significant destructive potential, as it can change its tactics and launch attacks in different countries and regions in the world.

In a message to the participants in the 7th Moscow International Security Conference, which kicked off on Wednesday with the participation of delegations from 95 countries including Syria, the Russian President said that other extremist groups also present a big threat to the world.

Putin stressed that it is now necessary to think about new forms of “multilateral cooperation” that would allow the parties to consolidate the success achieved in the fight against terrorism and to prevent the further spread of this threat.

Russian Defense Minister Sergey Shoygu said in his speech at the opening of the Conference that the situation in Syria has changed after eradicating Daesh (ISIS) terrorist organization, warning against the possibility of terrorists obtaining chemical and mass destruction weapons in Syria to carry out provocative acts, sowing chaos among the civilians and prolonging the crisis in the country.

In 2015 and upon the request of the Syrian state, Russia decided to help the Syrian government in eradicating Daesh and other terrorist organizations, Shoygu said, noting that the US-led international coalition didn’t achieve any outcome in fighting terrorism after it had interfered in Syria.

The Russian Defense Minister said that the international coalition sought to destabilize the situation in the region and enhance its military and economic presence in it, as it didn’t cooperate with Russia, and if that had happened, terrorism would have been eradicated in a shorter period.

He pointed out that the situation in Syria has changed following the start of the operation of the Russian Aerospace Forces, as Syria has been liberated from terrorists, many terrorist groups handed over their weapons, and Daesh was eradicated.

Shoygu said that despite the formation of the de-escalation zones, the terrorist organizations in Eastern Ghouta continued to target Damascus with shells and not only prevented the delivery of humanitarian aid and medicine to the locals of Ghouta, but they confiscated them and sold them, and due to that Russia and Syria faced a difficult mission on evacuating the civilians, asserting that more than 150,000 persons have been evacuated.

He added that during the past two days, civilians started to return to their homes in Ghouta.

The agenda of the conference covers security issues in Europe, Asia, Africa, and Latin America, and the outcomes of defeating Daesh (ISIS) terrorist organization in Syria through discussing various issues, among them prospects of realizing peace in the region, fighting terrorism and international cooperation in this regard, and prospects of finding a settlement in the Middle East.