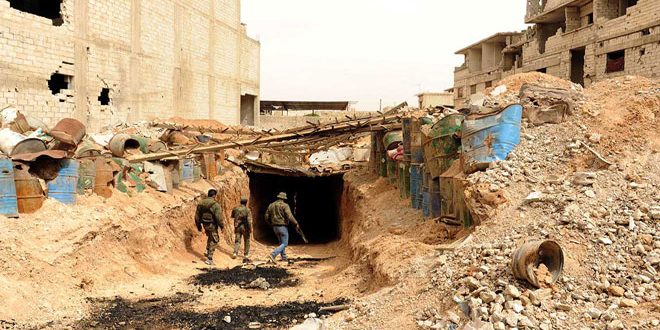 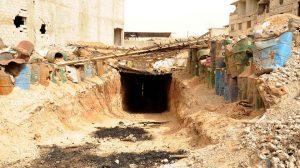 A field commander told SANA’s correspondent that during canvassing operations in Erbin town, army units discovered a tunnel that is 4 meters wide, 6 meters high, and 15 meters deep that links the towns of Erbin and Misraba in the Eastern Ghouta, and which had been used by the terrorists to move around and transport ammo using cars and armored vehicles.

The field commander said that a 500 meter long tunnel was also discovered that can fit cars, adding that the terrorists dug the tunnels beneath the residential buildings, as the tunnels’ entrances were covered with metal sheets and cloth barriers to hide their location. 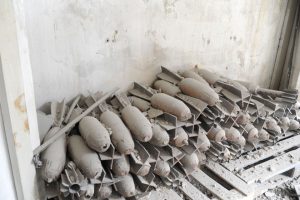 A member of the army’s engineering units indicated that a workshop for manufacturing the mortar shells that the terrorists had been using to target Damascus and its countryside was uncovered in Erbin, as well as a depot containing IEDs, noting that terrorists had also planted large number of the explosive devices at the entrances of buildings and streets.

Another field commander said that the army units found a number of containers full of chemical substances that have an unpleasant smell, and the authorities took samples to determine what these substances are and how to deal with them, adding that during the canvassing in the depth of the town, a workshop for manufacturing mortar and artillery shells was discovered, along with a car equipped with a rocket launcher that the terrorists had set fire to before they retreated from the town.