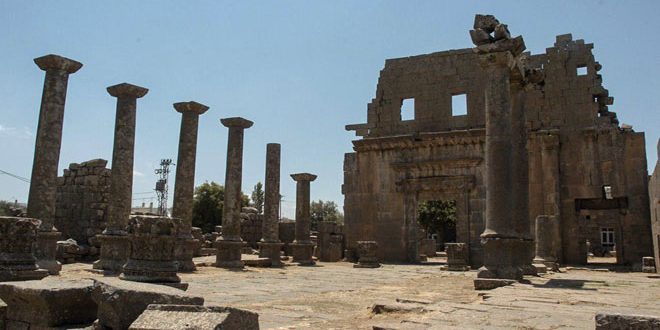 Sweida, SANA – The ancient temples of Qanawat village, about 7 km east of Sweida city, have been seen as unique architectural monuments that stand witness to the greatness of the ancient civilization which flourished in the region.

The archaeological city of Qanawat (also known as Canatha) is one of the Decapolis, a group of 10 commercial cities located in Jordan, Syria and Palestine, established by the Roman Emperor Pompey. It is famous for its Roman, Nabataean and Byzantine monuments, not to mention its importance as religious center for the southern area, said Nashaat Kiwan, Head of Sweida Department of Antiquities. 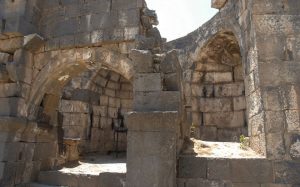 “Qanawat city embraces the Temple of Helios (God of Sun) which was built from Basalt stone in the 2nd century AD and dedicated to worship the god of sun. Corinthian columns still stand at the entrance and they are decorated with crowns and wreaths of acanthus leaves,” said Kiwan, adding that there are also the temple of Zeus (god of heavens) in the southern part of Qanawat city and the Temple of Athena (goddess of wisdom) which were built in the same era. While the temple of the goddess of water to the east of the ancient city and the Odeon Temple which resembles a small theatre on the eastern bank of Qanawat Valley date back to the second half of the 3rd century AD. 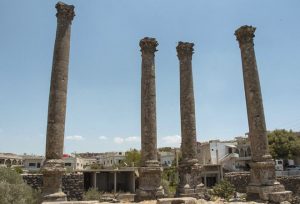 Other archaeological sites include Churches dating back to the 4th century AD and the ancient baths built in the early 2nd century AD.

Qanawat temples 2018-03-27
m.eyon
Share
Previous Army finds network of tunnels and field hospitals for terrorists in Hazza and Ein Tarma
Next Buses start to enter to pick up new batch of militants and their families from Jobar, Zamalka, and Erbin and in eastern Ghouta in preparation for transporting them to Idleb