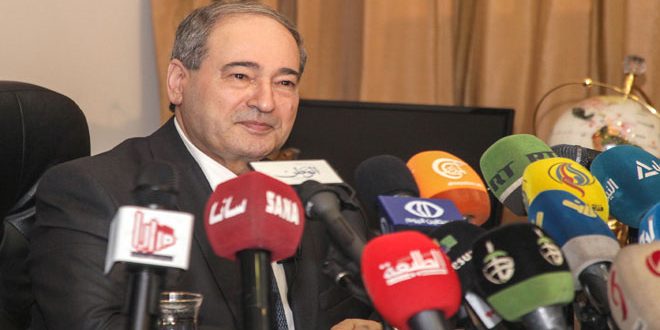 Damascus, SANA – Deputy Foreign and Expatriates Minister Fayssal Mikdad warned that well-known parties are leveling accusations against Syria regarding the use of chemical weapons as a result of the victories achieved by the Syrian Arab army in the fight against terrorism.

In a press conference held on Saturday, Mikdad said that the Organization for the Prohibition of Chemical Weapons (OPCW) continues to ignore the information provided by Syria on the use of chemical weapons by terrorists in several incidents, which is cause for suspicion and wonder, affirming that Syria has implemented UN Security Council Resolution 2118 on the dismantling Syria’s chemical program despite the very difficult and complex circumstances.

He said that the goal of the propaganda campaign currently being waged against Syria by the US and its allies is not only to provide support to the terrorists, who are using chemical weapons, but also to encourage them to use it again, adding that since the beginning of this year, four incidents of chemical weapons use by terrorists have been uncovered in Suruj in Idlib countryside and Msheirfeh.

The Deputy Minister pointed out that there is a lot of evidence of the use of munitions containing mustard gas by militants on September 16, 2016 in Umm Hosh, as well as their use of sarin gas in 2013 in Khan al-Asal and Eastern Ghouta.

According to Mikdad, OPCW experts ignored evidence proving that the armed groups have acquired large stockpiles of toxic chemicals and the technology needed to produce them through some neighboring countries, indicating that large quantities of these weapons were discovered in November and December 2017 in areas liberated from terrorists.

He went on to say that the army found in warehouses used by terrorists near al-Dhahiriya and al-Khafsah in Hama province containers containing 20 tons of chemicals and more than 50 rounds of ammunition rigged with chemicals, adding that 24 tons of toxic chemicals were found in Tal Adleh, along with a warehouse in Muadhamiya containing 240mm and 160mm ammo and plastic cans containing organic phosphorus, and a plant in the suburbs of Sweitra in the countryside of Hama that was used to manufacture various toxic substances, in addition to 54 pieces of chemical ammunition and 44 barrels containing chemical substances.

The Deputy Minister said that this information did not whet the appetite of the organizations claiming to want a chemical-free world at all, as they prefer to investigate only the false allegations made by the terrorists about the use of toxic substances in other areas by the government.

He described the conclusions of the international commissions of inquiry, including a fact-finding commission of the OPCW, which blame the Syrian government for the use of sarin in Khan Sheikun, as “lacking objectivity and credibility,” noting that the inspectors of the joint investigative mechanism refused to visit the alleged site and used “remote inspection,” and yet these investigations were used to justify the US attack on Shayrat airbase.

Mikdad explained that OPCW experts had visited the airport six months after the date of the attack, but the team of experts arrived without bringing the necessary equipment for the investigation and did not take any samples at the airbase, adding that the same happened during the investigation of using sarin gas in al-Latamneh and the using of chlorine Eastern Ghouta

He confirmed that despite the agreements reached with some of the armed groups to allow OPCW experts to enter areas controlled by militants, the experts did not visit these areas to collect evidence and samples.

“What do you expect from an investigation that takes place in Turkey other than the witnesses being fake, the information being fake, and the materials that were presented being fake too?” Mikdad said in response to a question about investigations made abroad that relied on samples supposedly taken from Syria.

In response to a question about the possibility of using the subject of chemical weapons as an excuse to attack Syria militarily, Mikdad replied that “We have enough conventional weapons to defend Syria and there is no justification for any country in the world to threaten Syria, except that they want to support the terrorists. We advise everyone against any military adventurism, because the international situation can no longer bear such aggressive practices.”

Mikdad noted that on March 7th, there was information indicating that terrorist groups in Eastern Ghouta are planning to fabricate chemical shelling and accuse the Syrian Arab Army of using chemical weapons, adding that this was planned to take place tomorrow, right before the meeting of the Executive Council of the OPCW so that this incident would be included in the meeting’s agenda. 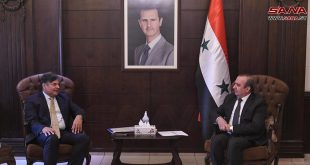